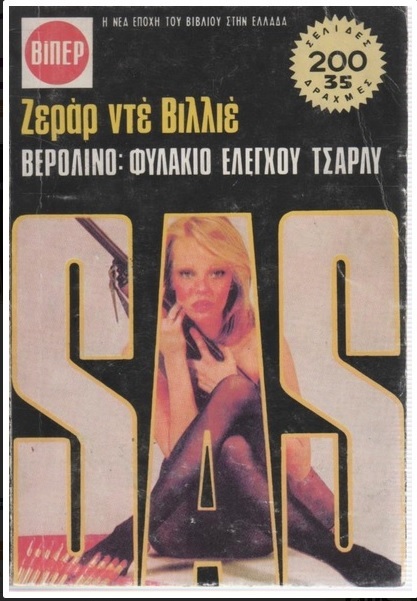 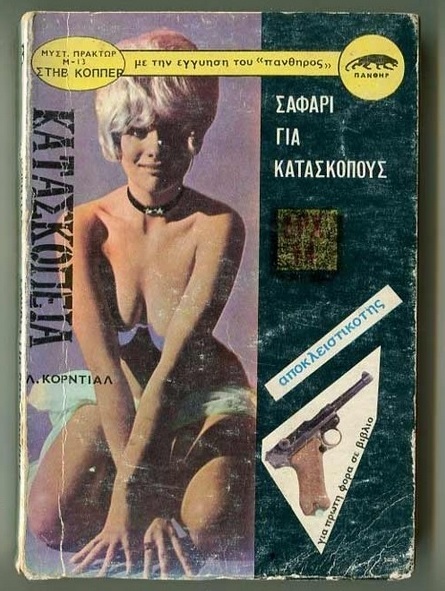 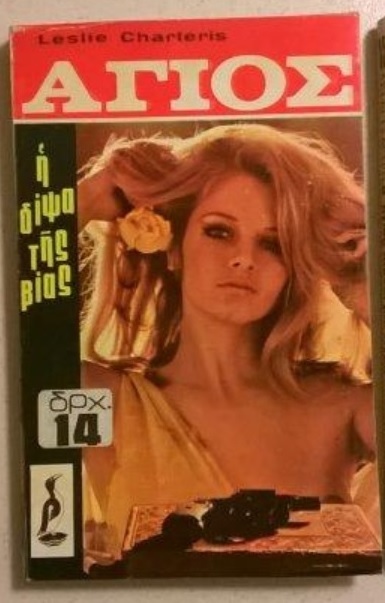 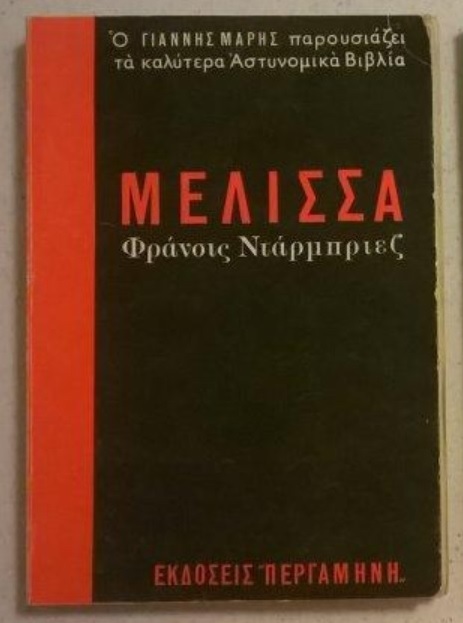 Without a doubt, the 1970’s was another prosperous decade for crime fiction in Greece. However, the information that we could gather about this period is even poorer than the previous one, as academic and amateur researchers seem so far to have almost entirely neglected this period. In any case, a crucial observation about the 1970’s is that the production of Greek popular fiction gradually declined and was overtaken by foreign imports. For instance, the aforementioned booklets for children and teenagers were overpowered by the American and Italian comics, and the same situation also benefited translation of foreign crime fiction.

One of the major crime fiction series, VIPER seira astinomikou mithistorimatos (“VIPER Series of crime fiction novel”) was launched by Papiros in 1971. Established in 1936, Papiros released the “Papiros-Larousse Encyclopedia” from 1962 to 1967 in collaboration with the French publisher Larousse. Following this remarkably successful venture, Papiros expanded into the area of popular fiction, with foreign crime series becoming its most popular product among Greek readers. The VIPER crime fiction series was the main competitor of those published by Lychnari and Agkira respectively. Until 1974 the English author James Chase was the writer most frequently translated in this series, while during the second half of the 1970’s a large number of the VIPER volumes were devoted to the SAS novels by the French author Gérard de Villiers.

It is also noteworthy that most translators on this series were women, an element that is indicative of the gradual social advancement of women in Greek society. The most active was Tasso Kavvadia (1921–2010), who should be considered as a central figure in popular culture and arts, due to her diverse career as an actor, journalist, radio producer and translator, and as a model for the progressive women in 1970’s Greece in general. As result of the success of its VIPER, Papiros soon went on to release others series dedicated to popular fiction, each one specialised in a different literary genre and style. Although the 1970’s remained the period in which the Papiros' series were most successful, they continued to appear until the early 1990’s. In fact, it is still possible to find their books in kiosks, bookstores and corner shops (Koskinas,2014).

To sum up, the three major post-war series presenting translated crime fiction in Greece were the Library of Detective Literature by Lichnari, Pocket Books of Crime Fiction by Agkira and the VIPER Series of crime fiction novel by Papiros. The wide circulation and reputation of these three series and the competition between them led to a rapid growth of the market. During the 1970’s in particular many new publishers appeared, but most of them soon ceased  trading, with  only a few of them meeting with any commercial success.

According to the available sources, other representative crime fiction series in this decade were Sinarpastika Vivlia Tsepis (“Fascinating Pocket Books”) by Panthir publications and Sighrona vivlia tsepis (“Modern Pocket Books”) by Kampanas Publications. The Panthir (“Panther”) firm was created by Dimitris Chanos, possibly between 1969 and 1970 [1]. Dimitris Chanos, in addition to being an author and a translator, was an important researcher of Greek popular fiction. The series Sinarpastika Vivlia Tsepis (“Fascinating Pocket Books”) ran between 1970 and (at least) 1973 [2]. While short-lived, the series is important because it stands as a paradigm of the changes in translated crime fiction during the 1970’s. These changes are obvious in the selection of the writers: aside from the “usual suspects” (e.g. Leslie Charteris and Agatha Christie) Panthir showed a special interest in the US hard-boiled style of crime fiction, especially the works of Mickey Spillane devoted to Mike Hammer. It is interesting to stress that the covers of Spillane’s novels featured photos of almost entirely undressed women, which indicates the increasing connection between  “adult” erotic magazines and crime fiction. In fact, a similar phenomenon was happening in Greek cinema in the same period: a large number of genre movies, especially the popular dramas and the film noirs of the 1950’s and the 1960’s, accentuated their sexual content, claiming this would provide a more realistic representation of contemporary society (Soldatos, 197-204).

The crime fiction series by the “Kampanas” imprint had a similar course to the ones of Panthir. The series Sighrona Vivlia Tsepis ("Modern Pocket Books") also circulated during the early 1970’s and promoted writers offering a more explicit representation of violence. Arguably these series introduced for first time the famous hero Baron created by Anthony Morton (real name John Greasy) to the Greek readership. In general, during the first half of the 1970’s publications by Kampanas focused on spy novels. The company was also one of the most successful in the field of foreign comics; they were the importer of Marvel comics during the 1980’s and the 1990’s.

The trend towards a more violent and eroticised approach to crime fiction was followed by other publishing companies. Examples include the series by the publishing houses Alkion ("Kingfisher"), responsible for Εkdoseis astinomikon kai logotehnikon vivlion tsepis ("Publications of crime fiction and literary pocket books") and Skiouros ("Squirrel"). Unfortunately,  information about these books is very limited, if not non-existent. (For a brief presentation of this trend of intense violence and sexuality in Greek crime fiction of the 1970’s, see a post on the International Crime Fiction Research Group website).

As a “counterweight” to this invasion  of violence and sex into crime fiction, in the early 1970’s the firm Pergamini (“Parchment”) launched the series O Giannis Maris parousiazei ta kalitera astinomika vivlia (“Giannis Maris presents the best crime fiction books”). The famous Greek author was responsible for the selection of the novels included in the series, serving as a guarantor of the quality of the whole project.

[1] This information was given to me by Dimitris Vlachos in a personal communication.

[2] The latest extant copy of the Panthir series in National Library online catalogue is volume 55 [“The duelist of crime” (“O monomahos tou egklimatos”) by Mickey Spillane], published in 1973. The title of the Greek edition is different from the original one, which we were unable to identify.